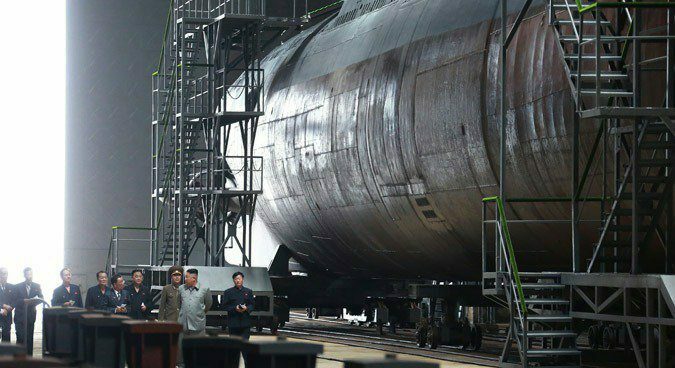 North Korea is believed to have test-fired a submarine-launched ballistic missile (SLBM) off its eastern coast on Wednesday morning, South Korea’s military said in a statement.

In a follow-up assessment following initial news of the test, South Korea’s Joint Chiefs of Staff (JCS) said the military detected “one unidentified ballistic missile” being fired eastward from waters northeast of the Wonsan area, Kangwon Province at 0711 local time.

“The ballistic missile launched this time is presumed to be Pukguksong-class,” the JCS added.

The missile flew around 450 km from the DPRK’s east coast, the statement continued, at an apogee of around 910 kilometers.

“Our military is maintaining the readiness posture while tracking and monitoring the relevant movement in preparation for additional launch,” the JCS statement stressed. “North Korea’s act of heightening tensions is not helpful to efforts towards alleviating military tensions on the Korean peninsula, and we repeatedly urge it to stop immediately.”

In response to Wednesday’s missile test, the standing committee of the National Security Council (NSC) convened an emergency meeting at 0750 local time, the Blue House said.

Director of the Presidential National Security Office (NSO) Chung Eui-yong convened the meeting, at which participants agreed to “conduct a precise analysis in close coordination between the South Korean and the U.S. intelligence authorities, giving the weight to the possibility that North Korea… test-fired an SLBM.”

The launch follows DPRK leader Kim Jong Un’s surprise inspection in July of what state media described as a newly-built submarine — believed to be a successor to the country’s Sinpo/Gorae-class ballistic missile submarine (SSBA) and dubbed the “Sinpo-C.”

In a report on the visit at the time, the country’s state-run Korean Central News Agency (KCNA) reported that the submarine’s deployment “in the operational waters of the East Sea of Korea and its operational deployment is near at hand.”

South Korea’s defense military that same month said it believed the new submarine to be capable of carrying three SLBMs.

Satellite imagery analysis by NK News‘s sister site NK Pro earlier in the year and, more recently, 38 North have suggested the DPRK has in recent years sought to upgrade its submarine fleet and that that project is nearing completion.

If confirmed, Wednesday’s test would represent North Korea’s first of an SLBM since August 2016.

One expert, however, said the figures released Wednesday did not match the known performance of the Pukguksong-1 — the missile launched at that test.

“It may be the Pukguksong-3,” said Ankit Panda, an adjust senior fellow at the Federation of American Scientists, referring to as-yet-untested longer-range SLBM long believed to be under development by the North.

“It’s also concerning if North Korea has sailed out the Gorae to near Wonsan for this launch,” he added. “It’s possible they may have used the towed underwater platform (TULP) and towed it out.”

The timing of Wednesday’s test — the DPRK’s 11th this year — is notable, coming just a day after after North Korean first vice foreign minister Choe Son Hui announced that working-level talks with the U.S. were set to take place on Saturday.

The Blue House in response said the members of the standing committee “expressed strong concern over North Korean testing the missile ahead of the resumption of North Korea-U.S. negotiations on October 5.”

“The members of the standing committee will put diplomatic efforts in tandem with the international community including the U.S. to ensure negotiations  between North Korea and the U.S. can successfully take place,” the statement added.

In response to the test on Wednesday, the U.S. State Department said it was closely monitoring the news.

“We are aware of reports of a possible North Korean missile launch,” a spokesperson said. “We are continuing to monitor the situation and consulting closely with our allies in the region.”

The range of Wednesday’s launch — and the fact that it is reported to have splashed down in Japan’s Exclusive Economic Zone (EEZ) — was particularly significant, one expert said.

“This breaks the limit on tests staying below 1000km since Singapore (first test since HS-15 in Nov 2017 to splash down in Japan EEZ). This cannot be easily dismissed as a routine test,” Vipin Narang, an associate professor of political science at the Massachusetts Institute of Technology, told NK News.

“This is not the sign of a state about to give up its nuclear weapons program,” he added. “He may have wanted to get it in before talks began so it didn’t disrupt the process, and assumed that testing now, after all the effort to get talks going by Washington, wouldn’t torpedo the meetings (pun intended).”

“It is also clearly designed to give Kim leverage before talks, reminding us what his maximum pressure campaign looks like.”

North Korea is believed to have test-fired a submarine-launched ballistic missile (SLBM) off its eastern coast on Wednesday morning, South Korea's military said in a statement.

In a follow-up assessment following initial news of the test, South Korea’s Joint Chiefs of Staff (JCS) said the military detected “one unidentified ballistic missile” being fired eastward from waters northeast of the Wonsan area, Kangwon Province at 0711 local time.