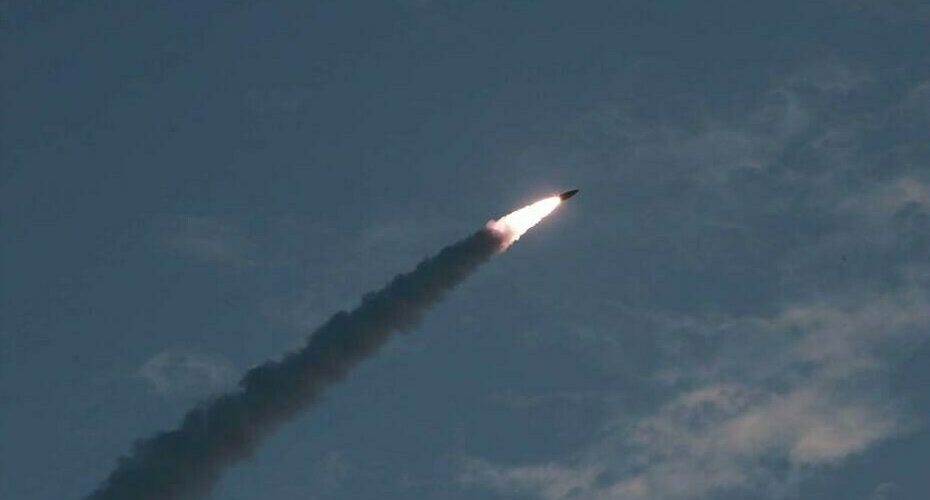 Correction at 1700 KST: A previous version of this article said the missile had been launched from the DPRK’s east coast. It has been amended to correct that.

“Our military today (August 6) detected two projectiles, which are presumed to be short-range ballistic missiles launched in the vicinity of Kwail [County] in South Hwanghae province,” it said.

“We detected the altitude of short-range missiles launched this time was around 37km, the flying distance was around 450km, the maximum flying speed was 6.9 Mach or more.”

Seoul on Tuesday said the missile launched earlier in the day was assessed to have similar flight characteristics to that tested on July 25.

That missile was later assessed to be the KN-23 — a short-range ballistic missile (SRBM) first displayed at a February 2018 military parade in Pyongyang.

“The South Korean and U.S. intelligence authorities assess the short-range missiles have the similar flight characteristics to the short-range ballistic missiles launched on July 25,” the JCS said. “The specifications are under analysis.”

Defense minister Jeong Kyeong-doo and director of the National Intelligence Service (NIS) Suh Hoon, among other relevant officials, were reported to have attended.

The U.S., in turn, said it was aware of the situation and was tracking the launch.

“We continue to monitor the situation and are consulting closely with our South Korean and Japanese allies,” an administration official told CNN.

One expert said the location of Tuesday’s test was notable — and the first time it had been used for such a launch.

“It’s the first recorded ballistic missile launch from that province, which is most notorious in recent memory for being the site of the artillery units that struck Yeonpyeong-do,” he added.

“A core theme of the Kim Jong Un era of missile testing is to use new sites for operational missile exercises. This fits that pattern.”

The latest launch also comes as South Korea and the U.S. began scaled-back joint military exercises on Monday, and amid continued uncertainty over when precisely planned working-level DPRK-U.S. talks, originally slated for mid-July, will begin.

“It’s clear a prime motivation of these launches is to put pressure on the allies, and South Korea in particular, amid joint exercises,” Mintaro Oba, a former East Asia desk officer at the U.S. State Department, told NK News.

A statement by the North Korean foreign ministry released just minutes after Pyongyang was reported to have conducted a test on Tuesday morning condemned this week’s new drills, warning the country may soon deploy additional “powerful physical means” to defend itself.

“The U.S. should be mindful of what North Korea is saying but we have to bear the fuller picture in mind- they’ve intentionally forgone ICBM and nuclear tests in the hopes of negotiations restarting,” he continued. “This latest round of launches can be seen as North Korea continuing to maximize its negotiating position before discussions begin.”

“My fear is that the ROK-U.S. military exercises will dampen the spirit of future working-level negotiations, on top of an already shaky relationship that hasn’t seen much traction since Hanoi.”

Although U.S. President Donald Trump and his senior staffers have dismissed the North’s recent spate of tests as not impacting their desire for talks, an unnamed senior official on Friday said continued launches would only serve to further isolate Pyongyang.

“Those provocations, paired with a failure to follow through on their own commitments to reengage in diplomacy, were noticed by virtually every country attending this summit meeting over the last three days,” the official said following the end of the ASEAN regional forum in Bangkok.

Correction at 1700 KST: A previous version of this article said the missile had been launched from the DPRK's east coast. It has been amended to correct that. North Korea is believed to have launched two ballistic missiles from South Hwanghae province on Tuesday morning, South Korea’s Joint Chiefs of Staff (JCS) said, in a move which represents Pyongyang's fourth test in two weeks. A