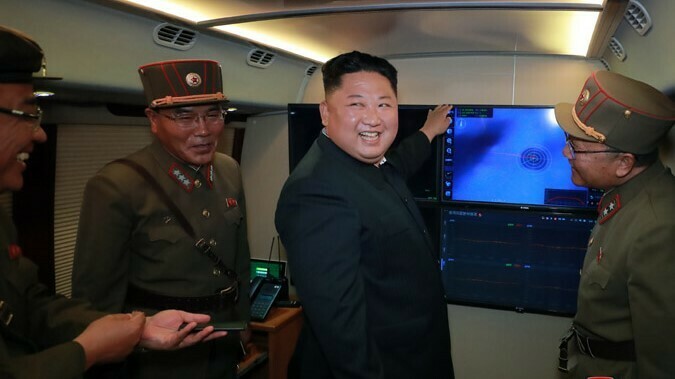 The launch was the second time North Korea had tested the new weapon this week, following a launch also overseen by Kim Jong Un on Wednesday.

“The test-fire was aimed to examine the altitude control flight performance, track control capability and rate of hits of the large-caliber multiple launch guided ordnance rocket.”

Following Friday’s test, analysis from Seoul suggested that the two launches this week shared similar flight characteristics, with the country’s Joint Chiefs of Staff (JCS) adding the missile had flown around 220 kilometers at a “maximum” speed of Mach 6.9 (8520.12 kilometers an hour) and a height of 25 kilometers.

North Korea has conducted three missile tests since July 25, with the most recent on Wednesday and Friday having been of a new-type multiple launch rocket system (MLRS).

Although Washington has dismissed the launches as no impediment to diplomatic efforts, South Korea expressed “strong concern” following the DPRK’s first launch earlier this week.

“[We] have decided to continue diplomatic efforts so that we do not lose the restarted momentum for the denuclearization of the Korean peninsula, created after last month’s historic South-North-U.S. summit gathering on the 30th at Panmunjom,” the Blue House said in a statement on Wednesday.

The UK, France and Germany also convened a closed-door meeting of the UN Security Council (UNSC) on Thursday in response to the renewed launches.

Pyongyang on Friday criticized that meeting, with a statement from the country’s foreign ministry defending its right to conduct to test-launch short-range missiles.

“The UNSC is getting on the nerves of the DPRK by groundlessly slandering the DPRK’s measures for conventional weaponry development while turning blind eyes to the war exercises in south Korea and shipment of cutting-edge attack weapons into it,” the statement said.

U.S. President Donald Trump and his senior staff have repeatedly stressed that the tests are not a barrier to negotiations and have urged North Korea to return to working-level talks.

One expert said Saturday’s morning’s coverage suggests that these kinds of tests may continue — at least during the month of August, when the U.S. and South Korea are expected to hold the “Dong Maeng” joint military exercise.

“The reference to Kim expressing ‘great satisfaction’ with the test result and to the ‘birth of another juche weapon’ seems to indicate the test-fire reached the intended objectives,” said Minyoung Lee, a senior analyst with NK News’s sister site NK Pro.

“The explicit reference to the DPRK not bound by any bilateral agreement or international law to “limit the range of projectiles, including missiles,” in today’s Foreign Ministry pronouncement seems significant,” she added.

“It appears highly unusual for North Korean state media to use the “limit the range of projectiles” formulation and seems to suggest that the North is free to, and could, extend the flight range of its projectiles in the future.”

“It also appears unprecedented for DPRK state media to say that Kim “guided” an activity “with” other officials,” Lee pointed out. “The norm is for officials to ‘accompany’ or ‘welcome’ Kim.”

“This extraordinary elevation may have been intended to give a further boost to the party Munitions Department and to Jang Chang Ha and Jon Il Ho, the two leading officials in the defense science sector.”