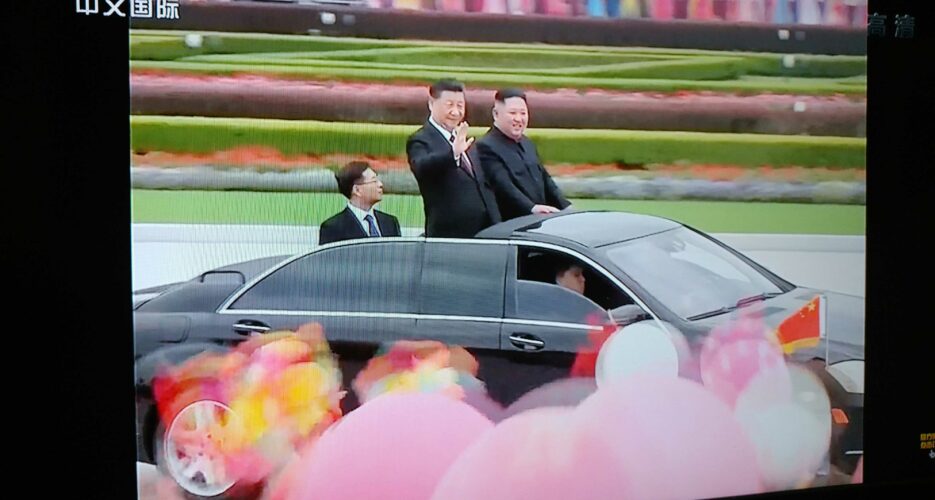 Following two welcoming ceremonies, first at the Pyongyang Sunan International Airport and then the Kumsusan Palace of the Sun – where the mausoleums of the former leaders are housed – the two leaders moved to hold expanded talks at the Kumsusan Guesthouse.

The Xinhua report said Xi “came to consolidate and inherit the friendship between China and DPRK, and to promote the process of political settlement of the Korean Peninsula issue.”

Xi was said to have mentioned denuclearization multiple times, saying he positively assessed North Korea’s efforts to “promote denuclearization of the peninsula,” and that there are “bright prospects for dialogue and settlement.”

“China is ready to help the DPRK to solve its own reasonable security and development concerns,” it added, hinting at importance placed on Kim’s security concerns much like Russian President Vladimir Putin did after their summit in April.

Signaling intentions to bolster its role as an international mediator, the report also conveyed Xi’s comments that China “is willing to strengthen coordination and cooperation with the DPRK and other parties concerned to play a positive and constructive role in achieving denuclearization of the peninsula and long-term regional stability.”

For his part on the issue, Kim Jong Un reportedly “said that over the past year, the DPRK has taken many positive measures to avoid tension and control the situation on the peninsula,” according to Xinhua.

“But it is not desirable for the North to have failed to receive an active response from the concerned side,” he reportedly added, likely in reference to the U.S. but without the country being named explicitly.

Nevertheless, it said North Korea is “willing to maintain patience” and that it will push for positive results on the “peninsula issue” together with China – towards whom Kim is grateful for their “important role in resolving” the issue.

On economic development and other exchanges, the two sides agreed to “expand pragmatic cooperation and bring greater benefits to the people of the two countries.”

“China is willing to deepen exchanges and mutual learning with the DPRK” in areas such as “education, health, sports, media, youth, and provincial [exchanges],” the report said.

The two sides have engaged in multiple exchanges in these areas already since bilateral ties warmed in early 2018, and state-run Korean Central News Agency (KCNA) reported that in the latest instance, a “delegation of the Journalists Union of Korea headed by Chairman of its Central Committee Cha Sung Su” left to visit China on Wednesday.

The Xinhua report added, without attributing a quote, that the “DPRK side is willing to learn more from China’s experience and practices, and is actively committed to developing the economy and improving people’s livelihood.”

In general, Xi reportedly said during the talks Thursday afternoon that the “two sides should strengthen strategic communication and exchange views on major issues in a timely manner.”

Sanctions were not mentioned in the report, however.

The occasion of the meeting, the 70th anniversary of bilateral ties, was mentioned multiple times throughout the lengthy comments from the two leaders.

The talks were held in the afternoon at the Kumsusan Guesthouse, a previously unknown location which may be a new mansion complex built since February just next door to the palace housing the former North Korean leaders’ mausoleums.

Kim and Xi were set to attend the reopening of the mass games late Thursday, following a two-week suspension resulting from Kim’s criticisms of the opening show earlier this month.

Following two welcoming ceremonies, first at the Pyongyang Sunan International Airport and then the Kumsusan Palace of the Sun – where the mausoleums of the former leaders are housed – the two leaders moved to hold expanded talks at the Kumsusan Guesthouse.