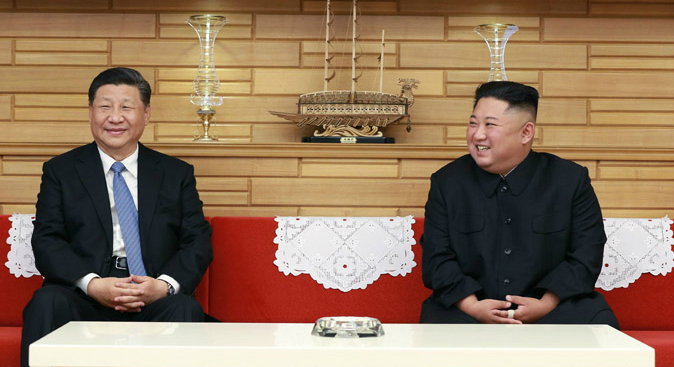 The leaders of China and North Korea on Thursday agreed to “deepen” cooperation and expand bilateral ties, DPRK state-run media reported on Friday, following extensive discussions over “grave” international and regional issues at their fifth summit in Pyongyang.

In talks, Chinese President Xi Jinping and North Korean leader Kim Jong Un were reported to have affirmed their consistent support for “continuously and vigorously strengthening and developing the DPRK-China traditional relations of friendship and cooperation in accordance with the demands of the times.”

In a Korean-language report, the North Korean party daily the Rodong Sinmun and the Korean Central News Agency (KCNA) said the two leaders “proposed excellent plans to more meaningfully mark the 70th anniversary of establishing the DPRK-China diplomatic relations and exchanged opinions” at a meeting at the Kumsusan State Guest House.

“Both assessed that further and deeper development of relations between the DPRK and Chinese parties and countries coincides with the common interests of the two countries and is advantageous to the peace, stability, and development in the region,” the Rodong reported.

Xi and Kim also agreed to “jointly and actively put efforts to make strategic communication between the parties and countries and cement mutual understanding and trust and maintain the tradition of high-level exchanges.”

The two leaders also agreed to “deepen exchanges and cooperation in each field” — previously promised by Xi in a rare contribution to the ruling party daily on Wednesday.

That article saw the Chinese President stress that Beijing and Pyongyang would seek to expand exchanges and cooperation in various fields, including “education, culture, sports, tourism, youth, rural areas, and people’s lives.”

North Korean state media on Friday reported the two leaders had “reached a common understanding of the issues discussed” at a summit, which was said to have taken place in a “comradery, serious, and candid atmosphere.”

Kim Jong Un “warmly welcomed” Xi to Pyongyang on the occasion of the 70th anniversary of the establishment of the two countries’ diplomatic relations, the Rodong and KCNA reported.

Kim “highly appreciated that his visit serves as the decisive opportunity to show off the immutability and invincibility of the DPRK-China friendship to the world,” the North Korean media continued.

Xi’s state visit also “has the significant meaning of further solidifying and developing the friendly relations of the DPRK and China, which enter a new period of vitality,” the North Korean leader said.

In contrast with Chinese media, the Rodong and KCNA did not elaborate on the talks between the leaders.

Thursday saw the Xinhua News Agency report that Xi had told Kim that China was willing to “provide assistance within its capacity for the DPRK to address its legitimate security and development concerns.”

The DPRK has not “received positive responses from the party concerned,” Kim was reported to have told Xi — likely a reference to the U.S. — although it “has taken many active measures to avoid tensions and control the situation on the Korean peninsula.”

Repeating comments made during a policy speech at a session of the 14th Supreme People’s Assembly (SPA) in April, Kim told Xi that the DPRK is “willing to stay patient” for the time being, expressing his hopes that the “relevant party” will work together to seek solutions.

Kim’s comments are noteworthy: this week’s Sino-DPRK meeting comes just a week before Xi is set to meet with U.S. President Donald Trump for a summit on the sidelines of the Osaka G-20 summit on June 28 and 29.

Trump is then expected to visit Seoul on June 29 and 30 for a summit with South Korean President Moon Jae-in.

North Korean media on Friday reported that several key North Korean officials, including Choe Ryong Hae, who serves as first vice-chairman of the State Affairs Commission (SAC) and president of the Presidium of the SPA, were in attendance at the DPRK-PRC summit.

Chairman of the Foreign Affairs Committee of the SPA Ri Su Yong and DPRK foreign minister Ri Yong Ho were also present at the bilateral meeting, along with Premier of the Cabinet Kim Jae Ryong and director of the General Political Bureau of the Korean People’s Army (KPA) Kim Su Gil.

Noteworthy on the Chinese side was the presence of head of the National Development and Reform Commission He Lifeng and Minister of Commerce Zhong Shan, as well as director of the General Office of the Communist Party of China’s (CPC) Central Committee Ding Xuexiang.

Director of the Office of Foreign Affairs Commission of the Central Committee of the CPC Yang Jiechi, and State Councilor and foreign minister Wang Yi also accompanied Xi, as did Admiral Miao Hua, director of the Political Work Department of the Central Military Commission (CMC), and head of the International Department of the CPC Central Committee Song Tao.

During the meeting, the North Korean media reported, both leaders also informed the other of the situation in their country and of achievements made in the “struggle of the people of the two parties and countries to advance the feat of the socialist construction and expressed their full support and solidarity with it.”

The leaders of China and North Korea on Thursday agreed to "deepen" cooperation and expand bilateral ties, DPRK state-run media reported on Friday, following extensive discussions over “grave” international and regional issues at their fifth summit in Pyongyang.

In talks, Chinese President Xi Jinping and North Korean leader Kim Jong Un were reported to have affirmed their consistent support for “continuously and vigorously strengthening and developing the DPRK-China traditional relations of friendship and cooperation in accordance with the demands of the times."