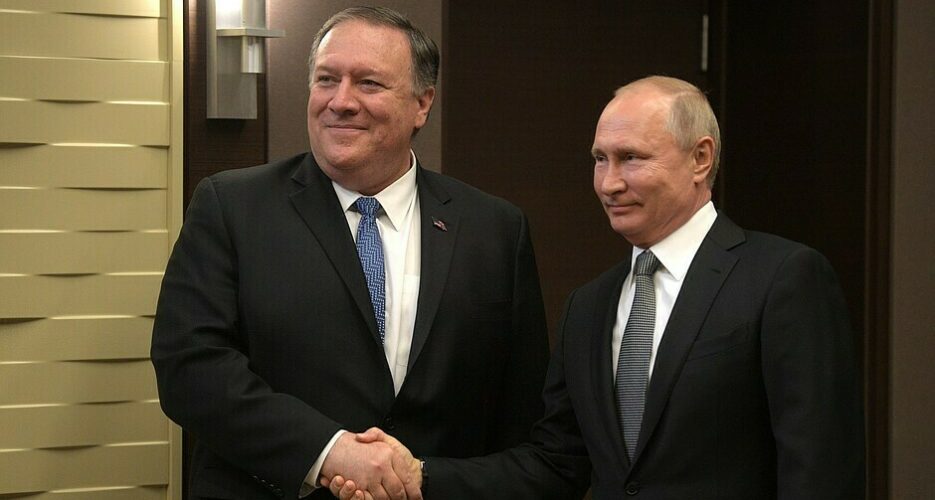 “We highlighted that the leadership of DPRK expects certain guarantees of security of their country reciprocated by denuclearization,” Lavrov said of his talks with Pompeo, echoing the main focus of President Vladimir Putin’s remarks after his summit with DPRK leader Kim Jong Un last month.

Aide to the President Yury Ushakov on Tuesday also said President Putin – who met Pompeo in Sochi as well – emphasized that “Russia is open to cooperation with all interested parties with the aim of creating a stable security mechanism in Northeast Asia.”

“We stressed that it is very important in this context to provide international security guarantees to North Korea in response to its steps on denuclearization,” Ushakov added in comments carried by TASS News Agency.

Speaking to reporters during a post-summit press conference in Vladivostok on April 25, Putin repeatedly suggested the main obstacle to progress in talks with the U.S. remains the North’s continued concerns over its security.

The U.S. and North Korea addressed the point explicitly in the Singapore Agreement signed last June, but have yet to carry out additional steps on the issue beyond Washington’s cancellation of some joint military exercises with South Korea.

The text of that agreement said “President Trump committed to provide security guarantees to the DPRK” in exchange for Kim Jong Un’s “firm and unwavering commitment to complete denuclearization of the Korean Peninsula.”

Ushakov added following Putin’s talks with Pompeo, however, that he believes “the Americans are generally ready to continue working [with Pyongyang] despite the stalemate” which resulted from the Hanoi summit.

Secretary of State Pompeo did not directly address the issue of security guarantees when speaking to reporters Tuesday, but said he believed Russia and the U.S. “share the same objective, and I hope we can find ways that we can work together on” denuclearization.

“We spent a fair amount of time thinking about North Korea, how we might unlock the denuclearization,” Pompeo said according to a readout from the State Department, adding he believes Putin “understands that the U.S. is going to be in the lead” in the process.

Speaking earlier at a press conference alongside Lavrov, Pompeo said the two sides “agree on the goal of the denuclearization, and we’ll continue to discuss it.”

One option floated by the Russian side this week for cooperation going forward is trilateral discussions between Moscow, Washington, and Beijing.

“We highlighted very useful cooperation that’s happening on Afghanistan, including the trio format,” Lavrov said alongside Pompeo on Tuesday.

Following talks the previous day with Chinese foreign minister Wang Yi in Sochi, Lavrov also mentioned Afghanistan as a model for the trilateral format between the three countries.

Lavrov said Monday he believes “that the situation on the Korean Peninsula may well be resolved more successfully if there is a closer trilateral dialogue between Russia, China and the United States.”

One area where disagreement appears to remain, however, is on the issue of sanctions.

While Pompeo said Tuesday that the U.S. and Russia “have been working very closely together on [sanctions] in a very productive fashion,” Pyongyang and Moscow have in recent months signaled a desire to avoid the full repatriation of North Korean workers from Russia by late December, as required under current sanctions.

During a visit by Russian lawmakers to Pyongyang in mid-April, the North Korean side reportedly “expressed their wishes that people would be given jobs” in Russia despite the requirement.

President Putin, too, said post-summit in Vladivostok that he discussed the issue of the laborers with Kim Jong Un and that “there are different options available” to address the issue, hinting Russia may change its strategy by saying some options include “humanitarian issues – there are issues related to the rights of those people.”

But Pompeo said that in his talks with Lavrov, he “underscored that we must maintain full implementation of the UN sanctions until the final, fully verified denuclearization of North Korea is achieved.”

Ushakov, on the other hand, said Tuesday that “the North Koreans will not succumb to any pressure,” and that “they need a respectful approach.”

Featured image: Administration of the President of Russia

“We highlighted that the leadership of DPRK expects certain guarantees of security of their country reciprocated by denuclearization,” Lavrov said of his talks with Pompeo, echoing the main focus of President Vladimir Putin’s remarks after his summit with DPRK leader Kim Jong Un last month.