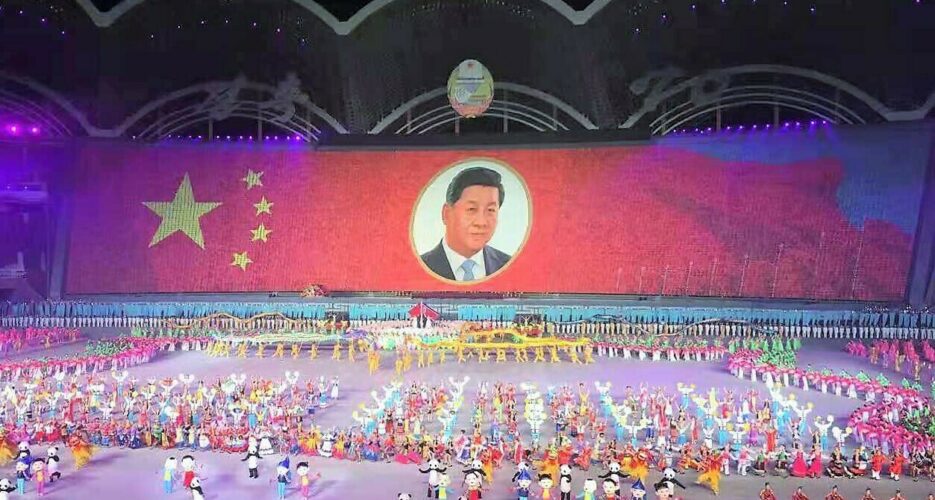 The backdrop of Pyongyang’s “Glorious Country” mass games on Sunday night prominently featured a portrait of Chinese leader Xi Jinping, in what one expert called a “hugely significant” signal of support to Beijing.

Featured in the same style used to depict past North Korean leaders Kim Il Sung and Kim Jong Il earlier in the same show, an image obtained by NK News shows an artistic rendering of the Chinese leader’s face framed in a gold oval during the final part of the performance.

The altered section of the grand mass gymnastics and artistic performance known as the “mass games” came during a show attended by a group of high-profile Chinese actors and musicians, in town as part of a special cultural delegation.

These included the slogans “Invincible DPRK-China relations unparalleled in world history,” “DPRK-China friendship will last forever,” and the words “Close neighbors” depicted between the Arch of Triumph in Pyongyang and the Forbidden City in Beijing, according to images provided in North Korean state media.

While these special slogans for certain bilateral relations have appeared many times over decades of mass gymnastics performances, the inclusion of a Xi Jinping portrait is “hugely significant,” according to Andray Abrahamian, North Korea expert and current Koret Fellow at Stanford University’s Asia–Pacific Research Center.

“That sort of display has only been reserved for Kim Jong Il and Kim Il Sung,” he added.

“And the Chinese Embassy and Foreign Ministry, and Party apparatus, will know that, so they will understand what a clear and unambiguous, positive signal the North Koreans are trying to send with this.”

The pointed message to the Chinese leader follows three official summits between Xi and Kim Jong Un this year, with Xi expected to travel to Pyongyang for a fourth soon.

While Kim Jong Un met with the artists’ delegation on Saturday night and attended a performance from the group, he did not join them for the mass games event the following night.

The cultural delegation is also the second of its kind in recent weeks, with a group of athletes traveling to Pyongyang to participate in a series of sporting events in October.

High-profile visits to the mass games of Chinese leaders in the past have seen the inclusion of similar special sections, but neither Wen Jiabao in 2009 or Jiang Zemin in 2001 saw their own faces in the show’s pixel board.

A “China Chapter” was included at the end of all shows of the “Arirang” mass games in their final years, Abrahamian said, which also focused on DPRK-Chinese “eternal friendship” and featured Chinese cultural mainstays such as pandas, dragons, and lion dances on the floor of the stadium.

The dragons and lion dances have also been a part of the “international friendship” section of the events throughout their run this year, but Sunday night’s show saw the return of pandas and other China-specific features as Xi’s portrait loomed in the background.

South Korea is another country which has seen special treatment during the mass games this year, with overtures to improved inter-Korean relations and even a video of President Moon Jae-in and Kim Jong Un’s April meeting appearing during Moon’s visit to the performance in September.

But unlike Moon’s depiction, Abrahamian said the Xi portrait “is loaded with significance in a way that a video isn’t.”

“It really is an attempt to accord Xi Jinping the highest respect,” he added.

The “Glorious Country” mass games have been extended multiple times since they began on September 9, with the website of North Korea’s National Tourism Administration most recently stating Sunday’s show would be the last.

One tourist industry insider told NK News on Monday, however, that the show may have been extended to Monday, possibly in order to accommodate the attendance of Cuban President Miguel Díaz-Canel, currently in Pyongyang for a series of meetings with top officials.

The backdrop of Pyongyang's “Glorious Country” mass games on Sunday night prominently featured a portrait of Chinese leader Xi Jinping, in what one expert called a “hugely significant” signal of support to Beijing. Featured in the same style used to depict past North Korean leaders Kim Il Sung and Kim Jong Il earlier in the same show, an image obtained by NK News shows an artistic 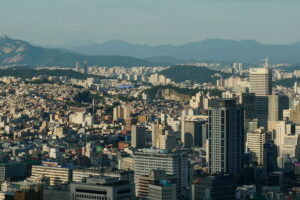