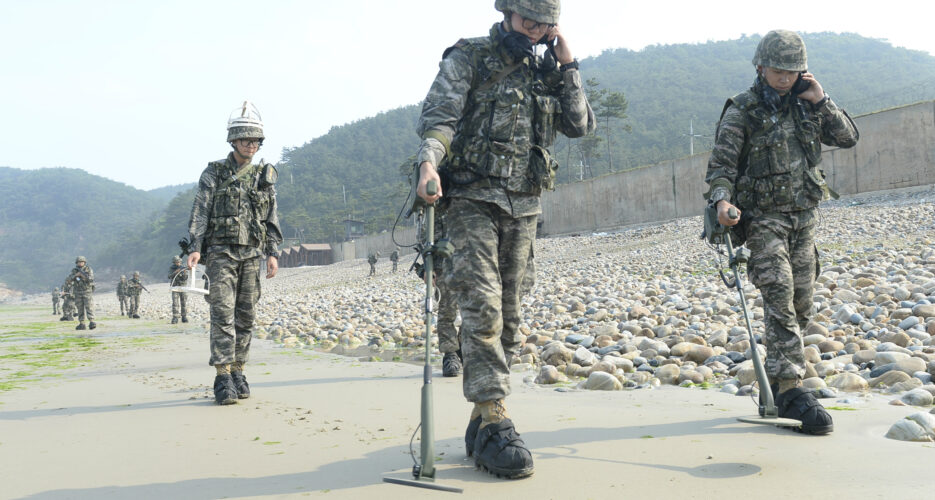 Seoul and Pyongyang on Monday began the process of removing landmines from the Joint Security Area (JSA) and Cheorwon County, the South Korean Ministry of National Defense (MND) announced, as part of measures to implement an inter-Korean military agreement signed in Pyongyang last month.

That agreement saw the North and South commit to demilitarizing the JSA through the setting up of a trilateral consultative body between Seoul, Pyongyang, and the United Nations Command (UNC) “to consult and implement measures to demilitarize” the area.

As a first step, the two Koreas and the UNC on Monday began removing the landmines – a process expected to last 20 days.

In a written statement, the defense ministry said the South will deploy an engineer corps to sweep for mines in the eastern and western area of woodlands and areas surrounding surveillance towers in the JSA.

The North has not publicly confirmed the move.

When the removal of landmines in the region is complete, the three parties will remove guard posts, personnel, and firearms within five days, according to the annex of last month’s military agreement.

The two Koreas and the UNC will also “withdraw unnecessary surveillance equipment.”

Once the demilitarization of the JSA is complete, the trilateral consultative body will decide issues including the composition, mission, and the operation methods of a joint administrative body for the area.

Monday saw the defense ministry also announce a plan to remove landmines near Hill 281 or Arrowhead in Cheorwon County, Gangwon Province in the Demilitarized Zone (DMZ) from October 1 and November 30.

The measure is part of the Inter-Korean Joint Operation to Recover Remains within the DMZ pilot project, which will be carried out between April 1 and October 31 next year, according to last month’s military agreement.

Minesweeping will be conducted for four hours a day from 1000 to 1200 and from 1500 to 1700 local time, though working hours can be extended or reduced depending on the circumstances.

This is the first time that the two Koreas have worked to excavate the remains of soldiers in the DMZ, where around 200 remains of South Korean soldiers and 300 remains of foreign combatants are estimated to be buried.

In Monday’s statement, the South Korean defense ministry said it aims to establish an inter-Korean road within the joint remains recovery site within the year.

The two Koreas have agreed to construct a 12 meter-wide road to facilitate progress in the joint recovery operations.

Seoul and Pyongyang must also notify the other side of the composition of the Joint Remains Recovery Team  — made up of 80-100 personnel — by the end of February.

In another attempt to “devise substantive military measures to transform the Demilitarized Zone into a peace zone,” the two Koreas will withdraw 11 guard posts located within one km of each other in the DMZ by the end of the year.

The measures will be taken on a trial basis ahead of the complete withdrawal of all guard posts within the DMZ.

The two Koreas have also agreed to halt various military drills targeting each other along the MDL, and to ban all types of aircraft from flying in the designated No Fly Zones near the inter-Korean border.

Seoul and Pyongyang on Monday began the process of removing landmines from the Joint Security Area (JSA) and Cheorwon County, the South Korean Ministry of National Defense (MND) announced, as part of measures to implement an inter-Korean military agreement signed in Pyongyang last month.