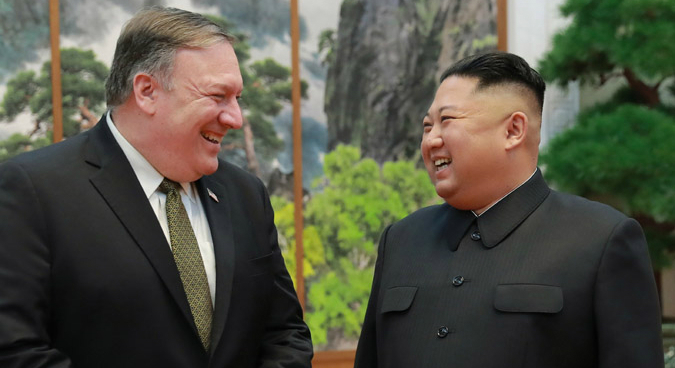 DPRK leader Kim Jong Un in talks with U.S. Secretary of State Mike Pompeo on Sunday said diplomacy between Pyongyang and Washington would “develop favorably” due to the “deep confidence” he and U.S. President Donald Trump have in each other, North Korean state-run media reported on Monday.

Kim made the comments during talks at the Paekhwawon State Guesthouse with the Secretary of State and his team – his third meeting with Pompeo this year.

“Kim Jong Un appreciated the positively developing situation on the Korean peninsula, explained in detail his proposals for solving the denuclearization issue and matters of concern of both sides,” the Korean Central News Agency (KCNA) reported in an English-language dispatch, adding the two sides had exchanged “constructive opinions.”

Pompeo and Kim were reported to have discussed “denuclearization measures that will be taken by North Korea” and logistics for the U.S. government’s inspection of nuclear sites that are taken out of commission, South Korean Senior Secretary to the President for Public Communication Yoon Young-chan said in a written statement.

The two sides also reportedly discussed “corresponding measures” that the Trump administration would take, though no further details on they might involve have emerged.

The U.S. State Department on Sunday also announced the DPRK leader had invited inspectors to visit the Punggye-ri nuclear test site – which the North claimed to have destroyed in the presence of international press in May – to “confirm that it has been irreversibly dismantled.”

Monday saw the KCNA report that Kim and Pompeo had discussed a planned second Trump-Kim summit, while agreeing to hold working-level negotiations on the issue “as early as possible.”

“There was an exchange of opinions of the top leadership of the two countries on the issues arising in holding the second DPRK-U.S. summit talks to be followed by an in-depth discussion of them,” KCNA reported.

Kim was reported to have expressed “the belief that the dialogue and negotiations between the North and the U.S. based on the deep confidence between the top leaders of the two countries would continue to develop favorably in the future.”

During the meeting, Kim thanked the U.S. President for making a “sincere effort” in making progress towards implementing the June 12 DPRK-U.S. joint statement, asking Pompeo to “convey his regards to Trump.”

The North Korean leader said he believed the two sides will devise a “good” plan for the second DPRK-U.S. summit “sooner or later,” pledging to make progress in fulfilling the June DPRK-U.S. joint statement at the upcoming meeting with Trump.

“The Supreme Leader expressed his will and conviction that a great progress would surely be made in solving the issues of utmost concern of the world and in attaining the goal set forth at the last talks with the projected second DPRK-U.S. summit talks as an occasion.”

KCNA reported that Kim had hosted a luncheon for the visiting U.S. delegation at the Paekhwawon State Guesthouse.

During the luncheon, both sides were reported to have discussed “issues of great interest such as further activating the communication and contact and visit between the two sides for the success of the DPRK-U.S. summit and the development of the DPRK-U.S. relations.”

While Pompeo on Sunday said he “had a good, productive conversation” with the North Korean leader, KCNA reported Kim also “expressed satisfaction over the productive and wonderful talks.”

A photo provided by the KCNA showed that U.S. Special Representative Stephen Biegun, head of the CIA’s Korea Mission Center Andrew Kim, and first vice department director of the DPRK’s Central Committee of the Workers’ Party of Korea (WPK), attended the first round of talks on Sunday.

Sunday also saw the U.S. State Department announce that both sides had discussed “the four elements contained in the U.S.-DPRK Singapore Summit Joint Statement,” as well as location and dates for the second Trump-Kim summit.

Pompeo and Kim also agreed to instruct their working-level teams to hold talks soon, “to intensify discussions on the key remaining issues to deliver on the Singapore Summit Joint Statement.”

“President Trump looks forward to continuing to build upon the trust established with Chairman Kim in Singapore and anticipates meeting again soon,” Spokesperson Heather Nauert said in a written statement.

“It is confirmed that Secretary Pompeo’s visit to Pyongyang led to many achievements,” Chung said at a high-level meeting between the administration and party officials.

“As a second North Korea-U.S. summit is taking place in the near future, the negotiation process on the denuclearization of the Korean peninsula is likely to gain a greater momentum.”

DPRK leader Kim Jong Un in talks with U.S. Secretary of State Mike Pompeo on Sunday said diplomacy between Pyongyang and Washington would “develop favorably” due to the “deep confidence” he and U.S. President Donald Trump have in each other, North Korean state-run media reported on Monday. Kim made the comments during talks at the Paekhwawon State Guesthouse with the Secretary of