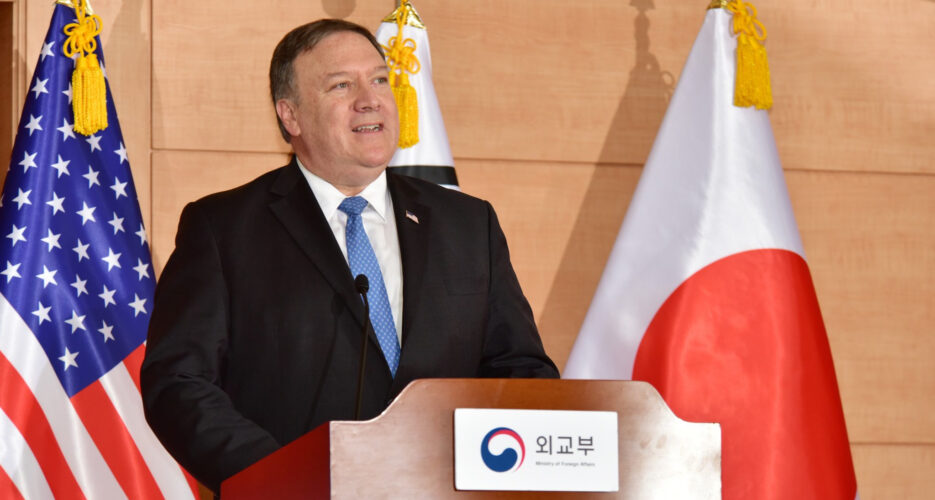 The U.S. and its northeast Asian allies are firmly committed to seeing a denuclearized North Korea before any sanctions on the DPRK are relieved, Secretary of State Mike Pompeo suggested during a press conference in Seoul on Thursday.

Addressing the media alongside South Korean foreign minister Kang Kyung-wha and Japanese foreign minister Taro Kono, Pompeo sought to downplay concerns over broad statements made by President Donald Trump this week regarding concessions and the process of North Korea’s denuclearization.

“The world should rest assured that the United States, the Republic of Korea, and Japan remain committed to achieving the complete, verifiable, and irreversible denuclearization of North Korea,” Pompeo said in his opening remarks.

“The U.S. alliances with these two countries are absolutely ironclad.”

Despite Pompeo’s reassurances over the U.S. goal to see the complete, verifiable, and irreversible dismantlement (CVID) of the North’s nuclear program, the June 12 summit in Singapore saw Trump and North Korean leader Kim Jong Un sign an agreement which did not include this language.

But Pompeo on Thursday suggested that text in the Singapore agreement signed between the U.S. and North Korea committing to “complete denuclearization of the Korean Peninsula” was no different from CVID, telling reporters the previous night in Seoul that the word “complete” inherently includes the definition of “verifiable and irreversible” in his and Trump’s view and therefore is “in the document.”

He said the joint agreement “made very clear” that the two ideas were one and the same, explaining at the press conference that there is a nesting-doll feature to the Singapore document which sees it encompass past agreements between the U.S. and both Koreas.

Tuesday’s agreement “incorporated… the very well-done document the Panmunjom Declaration, which itself incorporates all previous… inter-Korean agreements,” Pompeo said, implying that language referencing denuclearization conditions in those agreements are once again now in effect.

“I think that’s important as we come to understand the agreement that was signed between U.S. and North Korea,” he added.

One major concern following Trump’s post-summit remarks to the media was over the sequence of events that would lead to lifting sanctions on North Korea, as well as each side’s understanding of such conditions.

Tuesday’s press conference by the President saw Trump suggest that sanctions relief would be linked to action on denuclearization by Kim Jong Un, while also allowing for a loose interpretation of what such actions would constitute.

“The sanctions will come off when we are sure that the nukes are no longer a factor,” Trump said, adding that he wanted signs of “significant improvement” first – though this was also not clearly defined.

Despite this uncertainty, the Secretary of State insisted in Seoul on Tuesday that the President “has been incredibly clear about the sequencing of denuclearization and relief from the sanctions.”

According to Pompeo, Trump “has said this from the very beginning, he said it again to Chairman Kim and he said it at his press conference following his meeting with Chairman Kim.”

“We’re going to get complete denuclearization, only then will there be relief from the sanctions,” he said in response to a request for further clarification on the sequencing.

North Korean state-run media, on the other hand, revealed their country’s understanding on the matter on Wednesday, claiming that their own “trust-building” measures were contingent upon gradual sanctions relief.

The other major issue of concern following Trump’s remarks in Singapore were in regards to his sudden announcement that the U.S. plans to suspend its joint military exercises with South Korea – which he referred to as “war games” and a “provocation” to the press on Tuesday.

Pompeo was not asked directly about this in Seoul on Thursday and he did not choose to address the issue separately.

Speaking to members of the press the previous night, however, Pompeo said a freeze in exercises would be conditional upon there being ongoing “productive, good-faith negotiations,” though he did not clarify how this would be defined.

Foreign minister Kang was also asked during the joint press conference about a late Wednesday CNN report which said Trump would soon deliver detailed instructions to the Pentagon regarding his plan to halt joint military exercise with South Korea.

The South Korean foreign minister declined to comment on the veracity of that report, saying she had not discussed the issue in detail with her foreign counterparts and instead deferred answers on the subject to later unspecified high-level U.S.-ROK military talks.

Foreign minister Kono was the only of the three to address the issue during the opening statements, saying that Japan “understands that any pause in exercises is contingent upon DPRK action towards denuclearization.”

Japan is not a party to the August U.S.-ROK Ulchi Freedom Guardian (UFG) exercises, however.

Tokyo, too, appears to remain primarily concerned with addressing the abductee issue and other historical issues with North Korea, with Kono suggesting he would continue to push for a summit between Prime Minister Abe and Kim Jong Un.

The U.S. and North Korea are expected to continue negotiations following Tuesday’s summit, with Pompeo telling reporters Wednesday night that talks could resume “sometime in the next week.”

The Secretary of State also met with South Korean President Moon Jae-in prior to the joint press conference Thursday, where he reportedly briefed the President in detail on the Trump-Kim summit.

The U.S. and its northeast Asian allies are firmly committed to seeing a denuclearized North Korea before any sanctions on the DPRK are relieved, Secretary of State Mike Pompeo suggested during a press conference in Seoul on Thursday.

Addressing the media alongside South Korean foreign minister Kang Kyung-wha and Japanese foreign minister Taro Kono, Pompeo sought to downplay concerns over broad statements made by President Donald Trump this week regarding concessions and the process of North Korea's denuclearization. 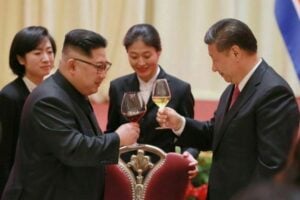