Pompeo headed to North Korea as Trump withdraws from Iran deal
U.S. President says "America will not be held hostage to nuclear blackmail"
Leo Byrne May 8, 2018 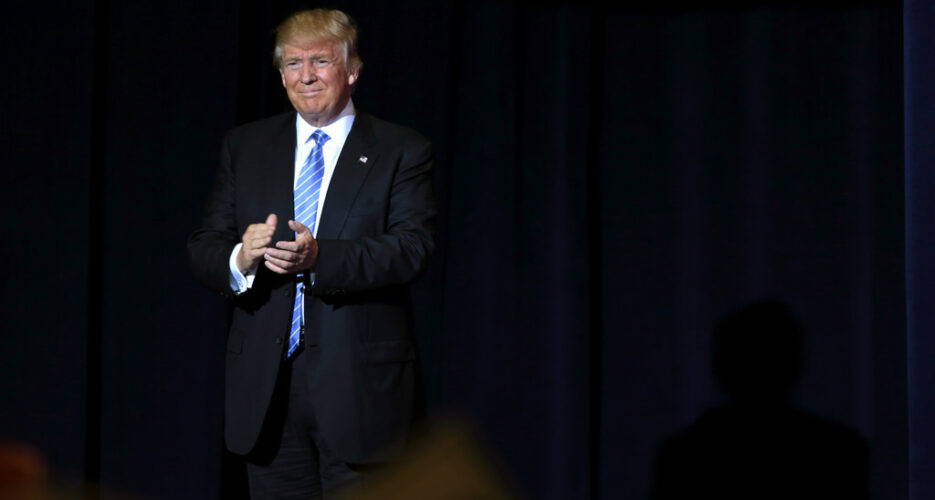 UPDATE AT 1702 PST: This story has been updated to include additional comments from Mike Pompeo

U.S. President Donald Trump on Tuesday said Secretary of State Mike Pompeo was heading back to North Korea for his second visit this year.

Speaking at a press conference in which he announced the U.S. would withdraw from the Iran nuclear deal, the President said Pompeo was already en route to Pyongyang to discuss an upcoming summit with North Korean leader Kim Jong Un.

“In fact at this very moment, Secretary Pompeo is on his way to North Korea in preparation for my upcoming meeting with Kim Jong Un,” Trump told assembled reporters.

“Plans are being made, relationships are building, hopefully, a deal will happen and with the help of China, South Korea, and Japan a future of great prosperity and security can be achieved for everyone.”

Pompeo later spoke to reporters during a press conference on route to Yokota Air Base in Japan, saying that he was hoping to “nail down” certain details about the upcoming summit.

“That’s the mission set. We’re trying to set out the conditions for (the summit) today.”

The Secretary of State reiterated that Washington was looking for North Korea’s full denuclearization, and admitted that Kim would likely not support U.S. terms.

“We are not going to do this in small increments, where the world is essentially coerced into relieving economic pressure,” Pompeo told reporters.

News of the Secretary of State’s visit to the DPRK has also raised hopes that he may also use the trip to obtain the release of three American citizens currently detained in the North.

Kim Sang-duk (also known as Tony Kim) and Kim Hak-song were detained by North Korean authorities in April and May last year, while the third detainee, Kim Dong-chul, has been imprisoned since October 2015.

The President last week told followers to “stay tuned!” for news on the three detainees, with administration advisor Rudy Guiliani on Saturday saying that “there is a good chance” they “will be released over the next several days.”

CNN also reported last week, citing anonymous sources, that their release was imminent – and that it had been proposed by DPRK foreign minister Ri Yong Ho during a visit to Sweden in March.

During his press conference at Yokota, Pompeo told press he would be raising the issue with his North Korean counterparts.

“We have been asking for the release of these detainees … for 17 months,” Pompeo said. “We’ll talk about it again today. I think it’d be a great gesture if they would choose to do so.”

Trump’s press conference on Tuesday saw the President add that all economic sanctions against Iran would be reinstated, as the deal allowed Tehran eventual access to nuclear weapons.

“The agreement was so poorly negotiated that even if Iran fully complied the regime can still be on the verge of a nuclear breakout in just a short period of time,” Trump said.

“Making matters the deals inspection provisions lacked adequate mechanisms to prevent, detect and punish cheating and don’t even have the unqualified right to inspect many important locations including military facilities,” Trump added, providing a possible window into what Washington expects from a denuclearization deal with the DPRK.

The U.S. announcement will no doubt cast a shadow over the upcoming negotiations with North Korea, though Pompeo has previously commented on the subject, saying he does not believe Kim is focusing on what the U.S. does with the Iran deal.

The Secretary of State met with the North Korean leader in Pyongyang over the Easter weekend earlier this year in his capacity as CIA Director.

In his speech on Tuesday, the U.S. President also made broader statements about nuclear weapons that may be seen to be linked to the upcoming talks.

“We will not allow American cities to be threatened with destruction and we will not allow a regime that chants death to America to gain access to the most deadly weapons on earth,” Trump said.

“Today’s actions send a critical message, the United States no longer makes empty threats. When I make promises I keep them.”

The deal with Tehran was a focus of Trump’s presidential campaign run and he has often publicly lambasted the agreement.

In an accompanying press release citing the justifications for leaving the deal, officially called the Joint Comprehensive Plan of Action (JCPOA), the White House called it one of the “worst” deals the U.S. has ever entered into.

The release adds that “Iran negotiated the JCPOA in bad faith, and the deal gave the Iranian regime too much in exchange for too little.”

UPDATE AT 1702 PST: This story has been updated to include additional comments from Mike Pompeo U.S. President Donald Trump on Tuesday said Secretary of State Mike Pompeo was heading back to North Korea for his second visit this year. Speaking at a press conference in which he announced the U.S. would withdraw from the Iran nuclear deal, the President said Pompeo was already en route to