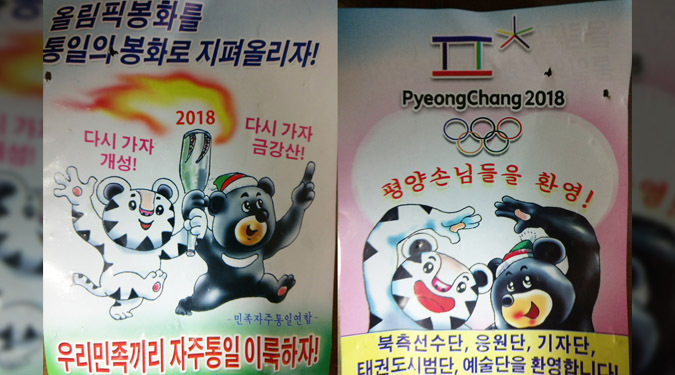 The single leaflet, which was found on Mt. Bukhan in northern Seoul, calls for rapprochement on terms closely linked to North Korea’s inter-Korean policy position.

“Let us burn the Olympic light as the light of the unification,” the main banner on one side of the leaflet says. “Let us accomplish sovereign unification with only our nation being involved!”

North Korean leaflets sent to Seoul have are typically harshly critical of South Korean and U.S. authorities, but since January have warmed in tone and also called for inter-Korean economic cooperation.

Kaesong is the location of a shuttered joint industrial complex in the North that was unilaterally closed by South Korea in 2016, while Kumgang is the site of an also shuttered inter-Korean tourism project, which shut in 2008.

Notably, the flyer presents itself as being published by a presumably South Korea-based civic society group: “The Union for Sovereign National Unification.”

“We welcome guests from Pyongyang,” the reverse of the leaflet says. “We welcome sportsmen, cheerleaders, Taekwondo demonstration team and art team from the North,” it adds.

Since Kim Jong Un called for inter-Korean rapprochement and for the DPRK to participate in the forthcoming Winter Olympics in his New Years Speech, North Korean state media has made regular references about the need to pursue “independent unification.”

“The North obviously wants better relations with the South and has hopes that they would eventually be reinstated to the pre-2008 level, before most of the sanctions and nine years of right-wing administration in the South,” said Fyodor Tertitskiy, an NK Pro analyst.

“Ideally for Pyongyang (and its supporters in the South) the world should treat their nuclear program as being no different from the Israeli/Indian/Pakistani ones and the Blue House should be open to cooperation with the DPRK,” he said.

Pastor Eric Foley, CEO of the Voice of the Martyrs Korea, an NGO which regularly sends leaflets by balloon to the North, said wind patterns suggested the leaflet had come from the DPRK.

“The majority of days in the winter would have winds to hit South Korea from the North,” he said.

“It’s possible to learn a lot from the flyers, both in terms of what they say and what they don’t say—and the fact that they exist at all, since anyone who sends flyers knows it is hardly as automatic a process as others might think,” he continued.

“The messages on the flyers certainly match North Korea’s internal narrative about the Olympics: a key step on the road to unification—the north, not the south, stepping out onto the world stage.

“The flyers telegraph several of North Korea’s preferred next steps in the unification process: Kumgangsan, Kaesong,” he continued.

“The flyers should remind us that North Korea is not simply “open” to “dialogue” or “peace” or “negotiation” but has very clear definitions of the kind of dialogue it is willing to engage in and what counts as peace.”

NK News has obtained dozens of leaflets from staff and Seoul residents during the past two years, with winter months being when the majority of leaflets appear to regularly show up in central Seoul.

A new propaganda leaflet focused on inter-Korean cooperation surrounding the forthcoming Winter Olympics, possibly sent from North Korea, was found in Seoul over the weekend, photos seen by NK News show.The single leaflet, which was found on Mt. Bukhan in northern Seoul, calls for rapprochement on terms closely linked to North Korea's inter-Korean policy position."Let us burn the Olympic