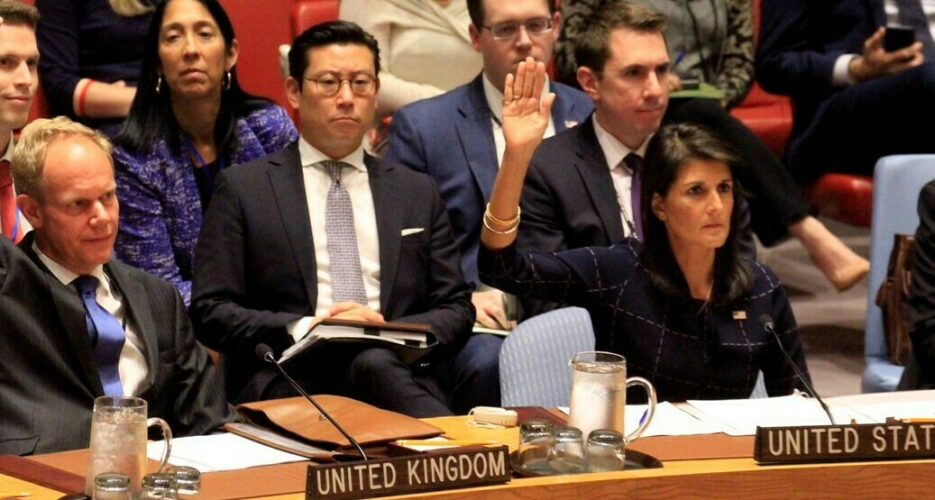 The United Nations Security Council (UNSC) on Monday unanimously adopted a new sanctions resolution against North Korea in New York, a response to the country’s sixth nuclear test on September 3.

A statement by the U.S. mission to the UN hailed the vote as a strong message to Pyongyang.

“This resolution reduces about 30% of oil provided to North Korea by cutting off over 55% of refined petroleum products going to North Korea,” it read.

“Combined with the previous Security Council resolutions, over 90% of North Korea’s publicly reported 2016 exports of $2.7bn are now banned (coal, textiles, iron, seafood), which does not include revenues from overseas workers.”

The North’s Organization and Guidance Department (OGD), the Central Military Commission, and the Propaganda and Agitation Department – which controls the country’s state media – also made the UN’s list of designated entities.

The most recent resolution is notable, however, for being weaker than that proposed by Washington, a probable consequence of concessions made to both Beijing and Moscow.

An original draft of the resolution made headlines as it sought to ban all fuels to the DPRK, while also authorizing member states to use force while inspecting suspicious North Korean vessels – neither proposal survived subsequent negotiations.

An oil embargo had been strongly supported by both South Korea and Japan – who began pushing for a new UNSC resolution in the aftermath of a North Korean missile launch on August 28.

Calls for a total ban of the export of oil products to North Korea amplified after the country’s sixth nuclear test on August 3.

In an emergency meeting of the UNSC last Monday, U.S. Ambassador to the UN Nikki Haley said a new resolution including the “strongest possible measures” would be prepared within the week.

But an oil embargo faced vocal opposition from Russian President Vladimir Putin, who last week said that he was concerned such a move would “hurt civilians.”

The eventual sanctions also did not include an asset freeze on either North Korean leader Kim Jong Un and the country’s only commercial airline, Air Koryo, both which were originally included by the U.S.

While North Korea’s export of laborers overseas was thought to be a key inclusion in the latest resolution, this too was weaker than the original provision, which would have banned the practice outright.

Monday’s resolution comes just over a month after the passage at the UNSC of resolution 2371 on August 5, itself a response to two tests by North Korea of Hwasong-14 intercontinental ballistic missiles (ICBM) in July.

The measures targeted North Korean exports, including coal, iron, lead, and seafood, and were estimated to, if properly implemented, cut the country’s export revenues by USD$1 billion.

One expert said that Monday’s new sanctions may be challenging from an implementation standpoint.

“While the UN resolution on North Korea adopted in August, simplified some of the previously complex aspects of the sanctions regime, this one restores and expands those complexities,” Andrea Berger, a senior research associate at the Middlebury Institute of International Studies, told NK News.

The United Nations Security Council (UNSC) on Monday unanimously adopted a new sanctions resolution against North Korea in New York, a response to the country's sixth nuclear test on September 3.