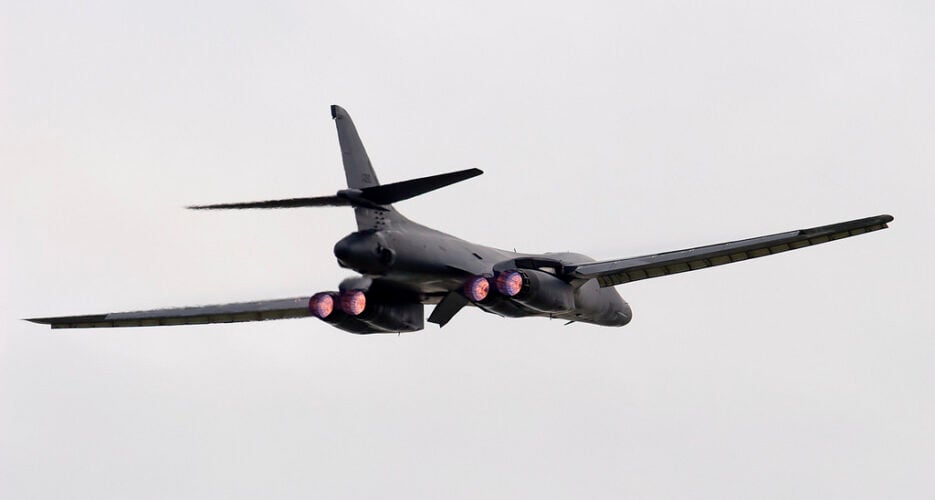 According to the Pentagon press release, the Air Force planes departed from Okinawa, Japan – the location of an Air Force base.

“This is the farthest north of the Demilitarized Zone (DMZ) any U.S. fighter or bomber aircraft have flown off North Korea’s coast in the 21st century, underscoring the seriousness with which we take DPRK’s reckless behavior,” a statement issued by Dana W. White, Chief Pentagon Spokesperson, read.

“This mission is a demonstration of U.S. resolve and a clear message that the President has many military options to defeat any threat,” the statement added.

“The U.S. Defense Department is being quite straightforward about this,” John Grisafi, NK News Director of Intelligence, said on Saturday.

“This sortie was intended as a show of force, a reminder of what capabilities and assets the U.S. military already has in the region and how readily they can reach North Korea,” he added. “The B-1B bomber is ideally suited to conducting strategic bombing missions and can carry the most powerful types of ordnance in the U.S. military’s inventory.”

According to the U.S. Air Force, supersonic B-1B Lancers are able to “carry the largest conventional payload of both guided and unguided weapons” and “can rapidly deliver massive quantities of precision and non-precision weapons.”

North Korea has reacted negatively to B-1B missions conducted around the peninsula on previous occasions, describing them as nuclear-capable aircraft.

Despite such assertions, the B-1B strategic bombers were converted to only deliver conventional weapons in 2011 under the New Strategic Arms Reduction Treaty (START).

The show of force follows a heated week in the UN General Assembly (UNGA), at which both U.S. President Donald Trump and North Korean Foreign Minister Ri Yong Ho leveling threats and insults from the podium.

“The United States has great strength and patience but if it is forced to defend itself or its allies, we will have no choice but to totally destroy North Korea… The United States is ready, willing and able but hopefully, this will not be necessary,” he said during the speech.

In response, North Korean state media carried a rare message from DPRK leader Kim Jong Un and Ri made a further response to the comments as well as Trump’s labeling of Kim as “Rocket man”.

Ri took the podium on Saturday following the Air Force mission, but did not allude to the B-1B flights during his speech.

He did, however, respond to Trump’s UNGA speech.

“He committed an irreversible mistake making our rockets’ visit to the entire U.S. mainland inevitable all the more,” Ri said, adding that any innocent U.S. lives lost as a result would be Trump’s responsibility.

“We will take preventive measures by merciless preemptive action in case the U.S. and its vassal forces show any sign of conducting a kind of “decapitating” operation on our headquarters or military attack against our country,” he added, saying his country would spare states that do not join the U.S. in such actions.

Multiple Air Force B-1B Lancer bombers and F-15C Eagle fighters flew a mission over international waters off the North Korean east coast, the U.S. Department of Defence (DOD) announced on Saturday. According to the Pentagon press release, the Air Force planes departed from Okinawa, Japan - the location of an Air Force base. “This is the farthest north of the Demilitarized Zone (DMZ) any