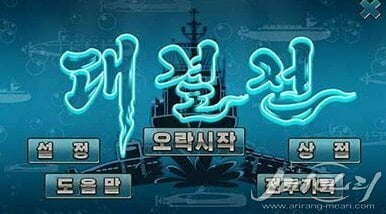 Photos published by North Korea’s state-run outlet Arirang-Meari on Friday showed new war game applications for mobile phones, two of which feature weapons known to have recently been developed by the DPRK.

“Confrontation war,” which was designed by the Advanced Technology Research Institute, allows users to “practice the law of victory in a virtual world in which battlefields are reproduced as they are.”

“Guardian”, whose manufacturer is not named, allows users to conduct naval warfare with cannons, multiple rocket launchers, and mines.

The ancient war game, released by the Pyongyang Electronic Video Recording Center, “vividly displays the battlefields of the Goguryeo period… with various settings for different quests, implementation of special movements, and breathtaking showdowns with the enemy.”

Arirang-Meari reported on January 6 that the Intelligent Information Insitute under the State Academy of Sciences had produced “Martial Arts Competition,” a mobile phone game application for Android, which can also be played on a computer or with a Microsoft Kinect.

“Soccer Fierce Battle” appears to be similar to the U.S.-produced FIFA games, and is comprised of “exhibition games, the Union of European Football Associations (UEFA) Champions League, European football league, training, soccer highlights, and other settings.”

Photos published by North Korea's state-run outlet Arirang-Meari on Friday showed new war game applications for mobile phones, two of which feature weapons known to have recently been developed by the DPRK.