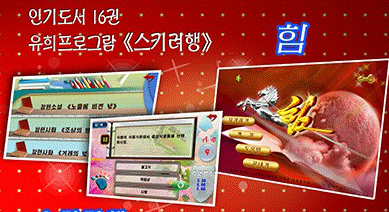 The outlet said that the “advanced science and technology exchange company” under Kim Il Sung University has “newly developed” a quiz program entitled “Him 2.0.” The Korean word him (힘) can translate to power, force, energy, or capability.

Version 2.0 has reportedly been updated with around ten popular books and games, and users can also evaluate their reading ability and intelligence quotient (IQ), according to the article and posters released by DPRK Today.

One poster said the program is “protected by the computer software protection act,” while another showed that in addition to answering common sense quiz questions, users can play a game called “Ski trip,” which appears to be a sports simulation game, as well as read 16 books.

DPRK Today reported on November 26 that researchers behind the “Boy General” cartoon-inspired video game had developed the app, and Arirang-Meari reported on May 15 that the program was “a hit with young students” and had been updated to “meet the demands” of users “who want to learn and know more as time goes.”

In the game, Tuesday’s report said, users fill in the blanks of simple or compound sentences, with solutions explained “in a concrete way,” so they can “broaden the horizons of their common sense.”

“New functions – which can contribute to the cultural life of workers and enhance the intelligence of young students such as books newly published in 2015 and 2016 and assessment of speedreading skills  – are added,” it said.

The app is one of a number of newly-released educational programs in North Korea. Arirang-Meari reported on Tuesday on a program called “Star of Mental Arithmetic” which can “contribute to training brain and improving skills of elementary school students.”

The program was devised as a type of “game and entertainment” and has been “distributed to various elementary schools” and used by families with children, the report said.

The outlet said that the "advanced science and technology exchange company" under Kim Il Sung University has “newly developed” a quiz program entitled “Him 2.0." The Korean word him (힘) can translate to power, force, energy, or capability.