Military action against N. Korea impossible without consent from Seoul: Moon
Seoul "will do all it can to prevent war" with DPRK, says President in Liberation Day speech
Dagyum Ji August 14, 2017 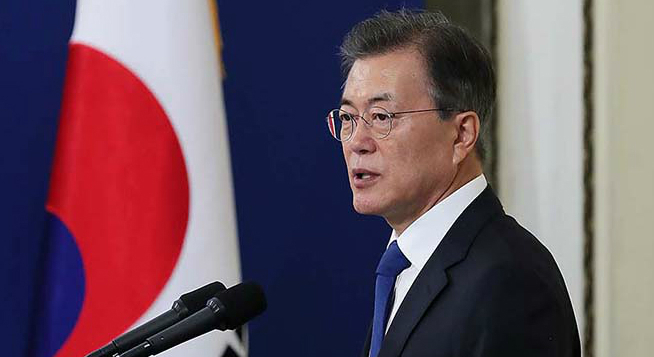 South Korean President Moon Jae-in said on Tuesday that military action on the Korean peninsula would not take place “without consent” from Seoul, pledging to “do all” to prevent a war.

In a speech marking the 72th anniversary of the South’s independence from the Japanese Empire, Moon reiterated that the national interests of the Republic of Korea (ROK) were his “top priority.”

“Only the Republic of Korea can make a decision for the military action on the Korean peninsula,” the President told participants at the ceremony.

“No country can determine to take military action without the consent of the Republic of Korea.”

The South Korean President said that “war must never break out again on the Korean peninsula,” but also stressed the importance of Seoul’s independent military capabilities.

“We cannot rely only on our ally for our security,” Moon said. “When it comes to matters related to the Korean peninsula, our country has to take the initiative.”

Describing the division of the Korean peninsula as an “unfortunate heritage of the colonial period,” the President said the South can “determine their own fate.”

“We have to achieve peace on the Korean peninsula and overcome the division with our own strength.”

The President said South Korea “must be the country that takes the helm in addressing matters concerning the Korean peninsula.”

South Korea will “build strong defense capabilities,” but will open a door for military dialogue to prevent “tensions between the two Koreas.”

Moon, however, added that dialogue should take place once Pyongyang “suspends additional nuclear and missile provocations.”

“The resolution of the North Korean nuclear issue has to start with a nuclear freeze.”

He also again reiterated that the U.S. position “doesn’t differ” from that of South Korea.

“We cannot help but further enhance sanctions and pressure on the North even though we do not want to,” Moon said.

“I urge the North to respond quickly to proposals to allow family reunions and visits to hometowns and ancestral graves.”

John Delury, a professor at Yonsei University, told NK News the speech had to be understood within the context of its delivery on Korea’s Liberation Day.

“The context is the long history of Korea, losing control of its fate to great power conflict that is the classic dilemma and tragedy of modern Korean history,” he said. “Today is the day when the Koreans reflect on that.”

“Given what has happened in last week or so… it’s more than understandable that the South Korean President stands up and says to the world: over our dead bodies.”

Since his inauguration in May, Moon Jae-in has consistently pushed for dialogue and cooperation with North Korea: demands that have largely been rebuffed by the North.

Seoul sent proposals for talks on easing military tensions and the reunion of separated families on July 17 to the North, but Pyongyang has not responded through official channels.

North Korean state media, however, has been critical of Seoul’s attempts at dialogue. An editorial early in the month saw in Uriminzokkiri said North Korea will only engage in talks with the South when Seoul ends its “confrontation lunacy.”

The editorial urged Seoul not to participate in the Ulchi Freedom Guardian (UFG) drills, which will take place at the end of the month, while another statement by a government-linked group demanded that Moon stop “dancing to the tune of psychopath-like Trump.”

Seoul’s consistent calls for dialogue and engagement with the North are in marked contrast to those of U.S. President Donald Trump, who last Tuesday said that Pyongyang would face “fire and fury” if it did not cease threats against the U.S.

Cheong Seong-Chang, a Senior Research Fellow at the Sejong Institute, said Moon’s “strong position of peacekeeping” could reduce tensions on the Korean peninsula, at least in the short-term.

But the long-term preventing of missile and nuclear tests, he said, would require cooperation among the international community to be “enhanced.”

Cheong also said that it was “unrealistic” for the Moon administration to expect the North to come forward and agree to a nuclear freeze.

South Korean President Moon Jae-in said on Tuesday that military action on the Korean peninsula would not take place "without consent" from Seoul, pledging to "do all" to prevent a war. In a speech marking the 72th anniversary of the South’s independence from the Japanese Empire, Moon reiterated that the national interests of the Republic of Korea (ROK) were his “top priority." “Only