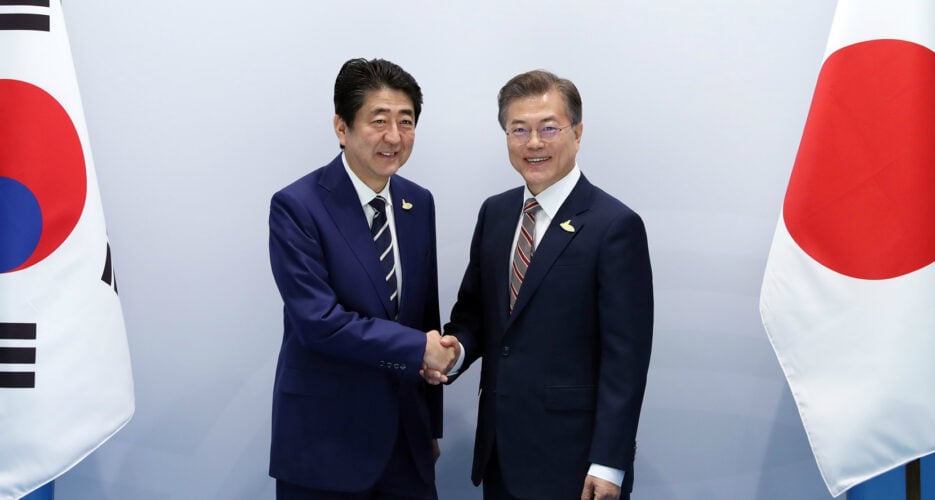 “[Both] agreed to push ahead with a UN Security Council sanctions resolution which includes more concrete and efficient measures against the North and to put efforts together to secure the cooperation from China and Russia,” Park said, citing Seoul and Tokyo’s “unprecedented coordination.”

“[And both] shared the view that [Seoul and Tokyo] will make the North come forward to the dialogue table… by increasing pressure on the North to the maximum.”

The two leaders agreed that close coordination between the South, the U.S., and Japan was to thank for the UNSC’s swift adoption on Tuesday afternoon of a statement condemning the test of what North Korea has confirmed was a Hwasong-12 ballistic missile.

The Blue House said on Tuesday that South Korean Minister of Foreign Affairs Kang Kyung-hwa and U.S. Secretary of State Rex Tillerson had agreed to draw up measures for “tougher sanctions on the North.”

Neither the Blue House or the Ministry of Foreign Affairs (MOFA), when contacted by NK News on Tuesday, were able to confirm when or if new sanctions would, in fact, be proposed to the UNSC less than a month after the passage of resolution 2371.

During the phone call with Abe, the South Korean President also condemned the North for conducting a test over Japan.

He said “the launch of the medium-long range ballistic missile that passed over Japan’s sky was a violent act against a neighboring country beyond provocation,” Park told media.

Moon also “expressed deep sympathy and consolation over the anxieties and threats that the Japanese people feel due to North Korea’s missile provocation.”

Moon and Abe are scheduled to hold an additional meeting in early September in Vladivostok during the Eastern Economic Forum.

Meanwhile, China’s Ambassador to the United Nations Liu Jieyi urged all parties to “avoid mutually provocative actions that might exacerbate the regional situation” at the emergency meeting of the UNSC on Tuesday, Reuters reported.

Russian Ambassador to the UN Vassily Nebenzia also stressed that there “can be no military solution to the issues plaguing the Korean peninsula.”

Speaking at the news conference, Nebenzia said the North’s missile launch was “a violation of all UN resolutions that have been adopted on their missile program,” but dismissed the possibility of new sanctions in response.

“You know, even contemplating an idea of new sanctions while we have just adopted the resolution on August 5, devalues the idea itself.”

UN Resolution 2371, adopted in early August, targets North Korea’s trade in coal, iron, lead and seafood, and is estimated to reduce the value of the DPRK’s exports by a third if implemented properly.

The new measures additionally target the DPRK’s use of foreign labor, another of the North Korean government’s sources of foreign currency.

Foreign Minister Wang Yi said on Wednesday that Beijing “doesn’t agree” with the test-firing, according to Yonhap.

“China is currently discussing issues with other Security Council members,” Wang said at a press briefing ahead of next week’s meeting of the BRIC nations in Xiamen, when asked if Beijing would move to cut its supply of crude oil to North Korea in response.

“We will take necessary measures against North Korea’s missile launch based on the common understanding of the Security Council members,” Wang said, adding that while sanctions play a role in discouraging North Korea’s  nuclear and missile development, “peaceful and diplomatic measures” should also be pursued.