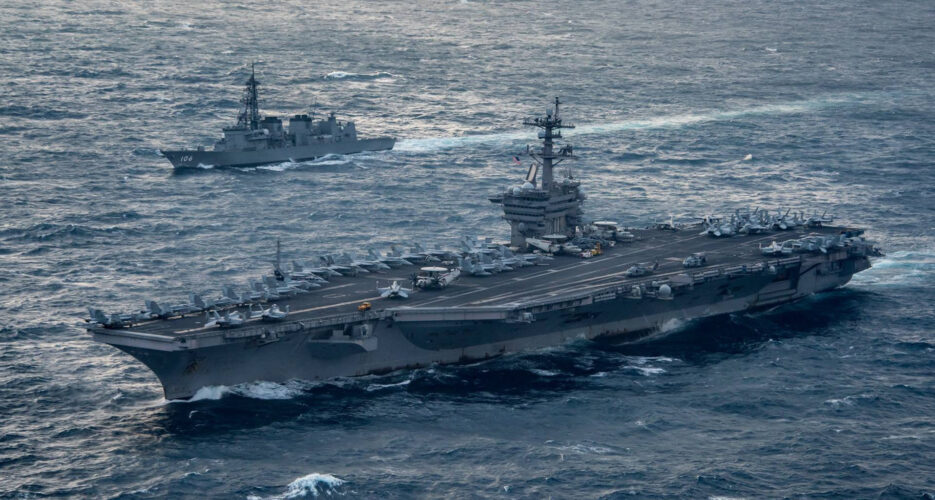 The U.S. Forces Korea (USFK) said on Monday (U.S time) that “assets from the USS Carl Vinson Carrier Strike Group and other United States forces” will participate in ROK-U.S. joint military drills in the waters around the Korean Peninsula during the annual Foal Eagle exercise.

Foal Eagle (FE) is a field training exercise (FTX) which aims to develop capabilities for ROK-U.S. combined operations. It began on March 1 and will continue until April 30, according to the South Korean Prime Minister’s Office.

Key Resolve (KR), a command post exercise (CPE) (one which focuses on headquarter staff preparedness in particular) began yesterday and will last until March 23.

The Nimitz-class supercarrier USS Carl Vinson (CVN 70) participated in Operation Iraqi Freedom and Operation Desert Strike. The 10 Nimitz-class aircraft carriers are the largest warships in the world, according to the U.S. Navy.

“The Vinson CSG and approximately 5,500 crewmembers are on a patrol conducting routine operations in the U.S. 7th Fleet area of operations,” the U.S. Naval Forces Korea said in a written statement.

Military personnel assigned to the USS Carl Vinson CVN 70, along with ones at Carrier Air Wing 2 and the Arleigh Burke-class guided-missile destroyer USS Wayne E Meyer (DDG 108), are planning to visit and engage with their South Korean Navy partners.

“The USS Carl Vinson’s presence is another tangible example of how the ROK–U.S. Alliance continues to enhance interoperability and key capabilities to ensure security and stability on the Korean Peninsula and the region,” General Brooks said.

While the USFK says it “routinely” conducts CSG operations in waters around the ROK to “exercise maritime maneuvers” and “strengthen the U.S.-ROK alliance,” North Korea has ratcheted up its rhetoric since the U.S.-ROK joint military drills began.

“If they infringe on the DPRK’s sovereignty and dignity even a bit, its army will launch merciless ultra-precision strikes from ground, air, sea and underwater.”

The U.S. Department of State publicly said on Monday that the USFK was making preparations for a “permanent station” of a Gray Eagle Unmanned Aerial Systems (UAS) company at Kunsan Air Base in the ROK, as a response to the North’s “growing threats.”

“In addition to THAAD (Terminal High Altitude Area Defense), these are largely – or not largely, these are defensive measures that are a response to what we – and by “we” I mean South Korea, the United States and, certainly, Japan – view as a real and credible threat to our security,” Mark Toner, Acting Spokesperson at the U.S. Department of State said on Monday during a press briefing.

The USFK said the UAS would add “significant intelligence, surveillance, and reconnaissance capability to U.S. Forces Korea and our ROK partners.”

“Gray Eagle has better performance than the unmanned air vehicles which the South Korean military possesses and can carry weapons,” Kim Min-seok, a senior researcher at the Korea Defense and Security Forum (KODEF), told NK News.

“Gray Eagle can exert power in counterfire and maritime operation,” Kim said. “Gray Eagle can attack an enemy immediately after spotting it while flying for 24 hours, and therefore it is the weapon which can respond quickest if the North Korean military appear near the ceasefire line – which is under the surveillance – and make a provocation.”

Kim said that the Gray Eagle UAS can’t be used to assassinate or infiltrate the North Korean command as it doesn’t have stealth capabilities and defense equipment.

The U.S. Forces Korea (USFK) said on Monday (U.S time) that “assets from the USS Carl Vinson Carrier Strike Group and other United States forces” will participate in ROK-U.S. joint military drills in the waters around the Korean Peninsula during the annual Foal Eagle exercise.