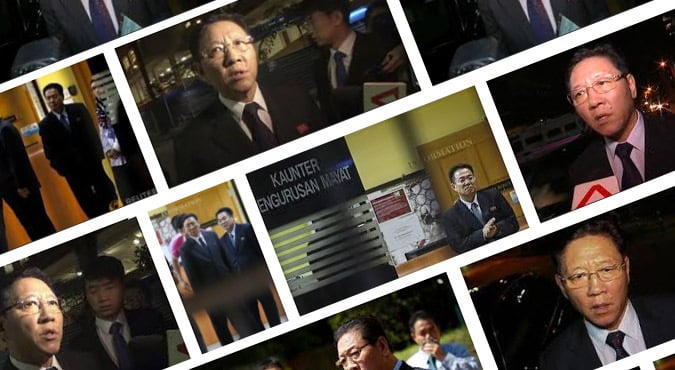 North Korea’s ambassador has demanded that Malaysian police return the body of the man believed to be Kim Jong Nam, the estranged half-brother of Kim Jong Un who died on Monday morning, and accused the government of “defamation” in a statement read outside the DPRK Embassy in Malaysia.

Ambassador Kang Chol told assembled press mid-afternoon that there was “no clear evidence on the cause of death” and that his government “cannot trust” the results of the investigation, blaming “hostile forces against the DPRK”.

While Malaysia’s Deputy Prime Minister Datuk Seri Dr Ahmad Zahid Hamidi confirmed on Friday that the citizen killed last week at Kuala Lumpur International Airport on Monday was Kim Jong Nam, Kang insisted that the man’s name is Kim Chol – believed to be an alias used by Kim Jong Nam and the name found on his passport.

“[The Malaysians] instead focused on identifying the other name alleged by the hostile forces against the DPRK,” Kang said.

Malaysia has said it will not release Kim’s body until it has received a DNA sample from Kim’s next of kin, a request which has reportedly not been answered. North Korea’s ambassador described this condition as “absurd”, insisting that the deceased was in possession of a diplomatic passport and should, therefore, be returned to the North as soon as possible.

But responding to the statement, Malaysian Prime Minister Najib Razak later on Monday said there was “no reason why we want to do something to paint North Korea in a bad light.”

Kang also called for the Malaysian government to allow North Korea to assist in the investigation, demanding a meeting with the two female suspects in the case to question them.

Referring to reports in South Korean media that Kim had either been murdered by a poisonous needle or smothered with a poisonous sheet, the ambassador said there were numerous discrepancies in the story that had to be investigated.

“If it is true, what a contradiction that the daubed person has died, but the person who daubed is alive,” he said.

“In this connection, there are so many questions and contradictions on where he is surely murdered by the female suspects or whether they are the fabricated suspects by the Malaysian police to hide the true cause of death.”

“Now there are so many rumors spread to the public to defame the image of the DPRK. The Malaysian police should bear the full responsibility for that.”

Kang also blamed the South Korean government of intervening in the investigation at an early stage and the Malaysians of briefing Seoul before briefing them.

Pointing to numerous reports in South Korean media with extensive details on the death of Kim on Tuesday, the North Koreans say they were only officially told about the death later in the day.

“How is it possible for south Korea to release the report on his death with other name before we know everything?” Kang’s statement read. “This shows the south Korea is involved in this incident.”

The Malaysian Police’s investigation into the case is ongoing.

On Sunday, Malaysian Deputy Inspector-General of Police Tan Sri Noor Rashid Ibrahim told a press conference that they were pursuing five named and two unnamed North Korean suspects in connection with the incident, which they have called a “sudden death under suspicious circumstances.”

Four suspects are now in police custody. Last week Malaysian police detained two female suspects from Vietnam and Indonesia, as well as the Malaysian boyfriend of the Indonesian female suspect, and on Saturday said they had detained a North Korea by the name of Ri Jong Chol.

Ambassador Kang on Friday said that the DPRK will reject the findings of any autopsy on the body of Kim Jong Nam and that Malaysia was conspiring with “hostile forces” against them, comments which saw him summoned to the country’s foreign ministry earlier on Monday to explain himself.

But despite reports in numerous international outlets that Malaysia’s Ambassador to North Korea had been recalled back to Kuala Lumpur in response, a phone call by NK News to the country’s diplomatic representation in Pyongyang confirmed that no such recall had taken place, and that the Ambassador would be staying in North Korea for the forseable future.

North Korea’s Ambassador to Malaysia earlier in the day told press that Kim Jong Nam might have died of “natural causes”, on the day that CCTV footage, acquired by Japan’s Fuji TV network, appeared to show the moment that Kim was killed.

In the video a woman approached him from behind, lunging to cover his face with a cloth before running away.

North Korea's ambassador has demanded that Malaysian police return the body of the man believed to be Kim Jong Nam, the estranged half-brother of Kim Jong Un who died on Monday morning, and accused the government of "defamation" in a statement read outside the DPRK Embassy in Malaysia. Ambassador Kang Chol told assembled press mid-afternoon that there was "no clear evidence on the cause of