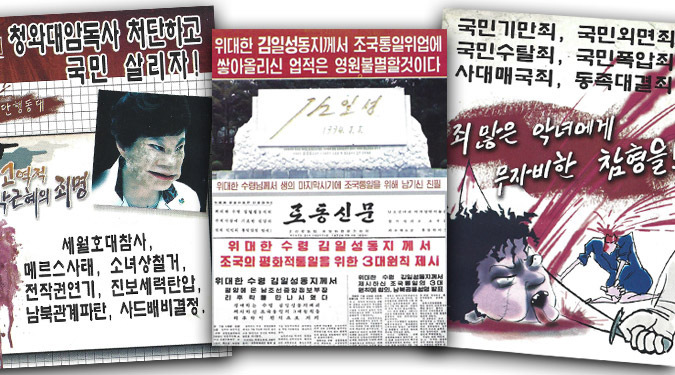 The discovery of the leaflets, which were shown to NK News by a local worker on condition of anonymity, follows a flurry of similar cases in Seoul since November last year – the month South Korea’s still-ongoing political crisis began to escalate.

Featuring a graphic cartoon depiction of a beheading, one of the leaflets said Park’s “anti-DPRK activities are…nothing but foolishness” and warned that “to the sinful wicked woman, ruthless decapitation follows.” The other side listed a series of accidents and controversies that have taken place in the South since her inauguration.

Another leaflet included a 1972 front cover of the Rodong Sinmun detailing a visit by former South Korean spy chief Lee Hu-rak to meet with North Korea’s founding President Kim Il Sung. The other side featured the profile of Jong Kyu Jin, a South Korean citizen who defected to the North in 1989.

Another found matched a design found in Seoul’s Yeonhui-dong over the lunar new weekend, showcasing North Korean weapons technologies and criticizing leaders of the U.S., Japan and South Korea.

The leaflets were likely distributed by air from North Korea, using high-altitude balloons that burst to distribute cargo across a wide ranging part of the city.

“The flyers promote the idea that what’s really bothering North Korea is Park Geun-hye,” said Pastor Eric Foley, CEO of the Voice of the Martyrs Korea, an organization which uses computer modeling and GPS technology to plan its own balloon launches into the North.

“North Korea may be calculating that the message will actually find some level of resonance here,” he said. “The subtext isn’t hard to discern: Replace Park Geun-Hye with someone we like better, and you won’t have to worry about these nasty missiles we’re building up here.”

Other Seoul-based observers agreed the increased frequency of leaflet drops and graphic anti-Park messaging was likely linked to the current political crisis.

“They are targeting a woman who is probably going to be impeached, and now the election campaign has basically started,” said Fyodor Tertitskiy, a PhD candidate researcher focused on North Korea.

“They want a president who would be left-wing,” he continued.

“North Korea is trying to bandwagon off anti-right wing sentiment and present themselves as being on the side of the S. Korean people,” said Peter Ward, another Seoul-based North Korea researcher.

“Short term it makes far more sense to have a liberal administration in Seoul because it allows for the reopening of Kaesong,” he said of the reason the North might be trying to undermine Seoul’s ruling conservative administration.

Foley, who conducts his own balloon launches to the North, said conditions had been ideal for DPRK leaflet drops by balloon as of Friday.

“Wind conditions are ideal for a launch from southwest North Korea (perhaps near 해주시) to Seoul,” he said. “North Korea’s previous launches all appear to have originated from this region.”

“Certain types of balloons, like the high altitude balloons we use, are capable of reasonably precise targeting,” he said. “There’s no reason North Korea would not launch into Seoul as often as the weather permits.”

South Korean law states that those who find leaflets should report the incident to the police so that local authorities can analyze the materials.

The discovery of the leaflets, which were shown to NK News by a local worker on condition of anonymity, follows a flurry of similar cases in Seoul since November last year – the month South Korea's still-ongoing political crisis began to escalate.