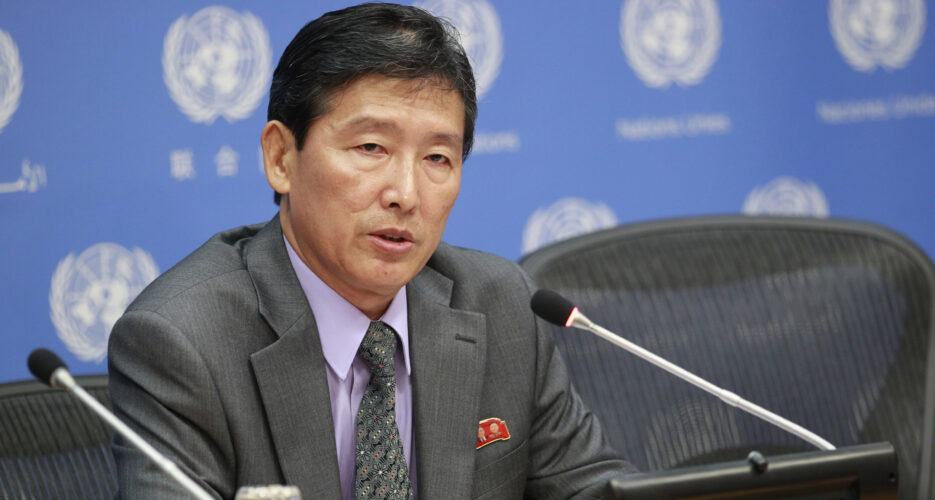 Ri Tong Il, former deputy permanent representative of the Democratic People’s Republic of Korea (DPRK) to the United Nations, visited Malaysia on Tuesday in a bid to negotiate with Malaysian authorities amid an ongoing diplomatic spat over the death of Kim Jong Nam.

Ri said he would discuss three different issues with the Malaysian government during his stay including “the question of the return of the body” of the man believed to be Kim Jong Nam.

“Number two, the question of the release of the DPRK citizen arrested by Malaysian police related to the above incident,” he read a statement outside the DPRK Embassy in Kuala Lumpur. “Number three, the development of friendly relations between the DPRK and the Malaysian government.”

Ri will now serve as North Korea’s official spokesperson on all issues related to the case, he added.

Amid growing speculation that Ri Kil Song’s visit was related to the murder of Kim – whose family is believed to be staying in Macau – South Korea’s  Ministry of Foreign Affairs (MOFA) on Tuesday declined to comment on the reason for the visit.

Ri Kil Song’s visit came 10 days after China’s announcement that the country would cease all coal imports from the North until the end 2017.

After the Royal Malaysia Police (RMP) announced on Friday that the VX nerve agent, an internationally recognized weapon of mass destruction, was the toxin used in the assassination of Kim, South Korea’s diplomatic authorities have used the case to step up international pressure on Pyongyang.

Speaking at the UN Human Rights Council in Geneva, Yun called for the international community to hold North Korea to account for violations of human rights by the country’s leadership at the International Criminal Court (ICC).

Yun argued that several hundred high-profile officials have been “openly and extra-judicially executed” in the North.

“This is not the end of the story. Just two weeks ago, the world was shocked when North Korean leader’s elder brother was ‘brutally assassinated’ at an international airport on Malaysian territory,” Yun said at the Human Rights Council.

Yun pointed out that eight of the suspects linked to Kim Jong Nam’s murder were North Koreans, including one diplomat at the North Korean Embassy in Malaysia.

“They revealed that the victim was killed with VX nerve agent, a chemical weapon classified as a weapon of mass destruction by the UN and also strictly banned by international norms and resolutions, including the Chemical Weapons Convention,” Yun said.

“All these acts constitute a serious violation of various international human rights instruments to which North Korea is a party. It is also an outright challenge to the rules-based international order.”

MOFA on Tuesday dismissed suggestions that South Korea’s involvement in the issue could be seen as an interference in Malaysia’s domestic affairs, arguing that the South Korean government is “adjusting their response level” and keeping close tabs on the investigation.

“It seems clear the North Korean government is behind [the murder] based on the investigation results, various information, and circumstances, and therefore the government authorities are responding in Geneva considering all things,” Cho June-hyuck, a MOFA spokesperson, told reporters during a regular news briefing.

U.S, South Korean, and Japanese chief nuclear envoys held trilateral talks on Monday for the first time in Washington since the inauguration of the U.S. President Donald Trump, in a move to map out a joint approach to North Korea and its nuclear programme.

“The representatives of the three countries will closely coordinate countermeasures in the future under the common perception that the murder of Kim Jong Nam is the crime against humanity as chemical weapons prohibited by the international law were used,” Cho June-hyuck said.

Meanwhile, the Organization for the Prohibition of Chemical Weapons (OPCW) said on Friday that it would offer assistance to the Malaysian authorities who have “determined that the nerve agent VX was used” to murder Kim.

The DPRK is not a member state of OPCW.

“Any use of chemical weapons is deeply disturbing,” an OPCW spokesperson said in a written statement. “OPCW stands ready to provide its expertise and technical assistance, if required, to any State Party to the Chemical Weapons Convention.”

Ri Tong Il, former deputy permanent representative of the Democratic People’s Republic of Korea (DPRK) to the United Nations, visited Malaysia on Tuesday in a bid to negotiate with Malaysian authorities amid an ongoing diplomatic spat over the death of Kim Jong Nam.

Ri said he would discuss three different issues with the Malaysian government during his stay including "the question of the return of the body" of the man believed to be Kim Jong Nam.